As the name indicates, the Globe valve is a globe-shaped valve that uses linear motion to control the disc. The disc moves perpendicular into the seat or out of it to open and close the valve. Globe valves are used for pipes less than 8 inches. A typical globe valve constitutes of 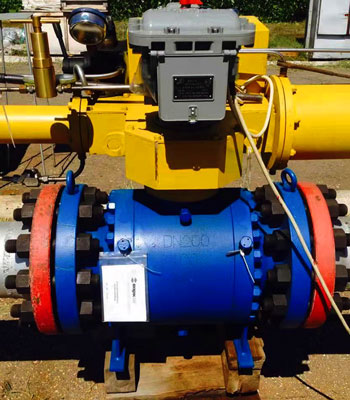 How Does A Globe Valve Work?

Globe valves are mainly used to stop, start or regulate fluid flow. A handwheel fixed on top is used to lower or raise the disc. The handwheel can be operated manually or by using an actuator. When the disk inside the valve body moves up, the valve stem pops out, and the fluid flows through the pipeline proportionally. When the disc seals on the seat ring, the flow is stopped completely. The stem will control the seating load of the disc. Globe valves either have a soft seat or metal seat. It comes in several seats and disc design variations to have uniform seating stress. Conventional disc, composition disc and plug discs are three main disc designs for globe valves.

For systems that operate under low temperature, the flow direction is installed to make the pressure act under the disk. This design eliminates erosion to the disc dace and seat. It is also easy to operate and has protective packing. Whereas, in a high-temperature system, the parts are positioned so that the pressure act above the disk. This design will avoid stem contraction undercooling.

Due to the proportional relationship between the disc and the flow, globe valves can be used for different flow regulations. The travel distance of the disc to open and close is short and hence can be used in applications that require frequent on and off. Other benefits of globe valves are:

Some of the applications of globe valves are –

At Oilway, the leading industrial valve manufacturers in Singapore, we ensure high commitment and dedication to provide consistent and high-quality globe valves. Call us, and we will be happy to help.