Is This The Beginning Of The End For Texas Oil?
January 22, 2021
Oilway Team
Industry News

Widespread misery was evident in the Dallas Fed’s latest survey, which included responses from 161 energy firms and took place from March 11-19. The quarterly survey offers a window into not just the economic health of the industry, but also a look into the psyche of many oil executives in Texas. The numbers were stunning. The broad business activity index, which measures activity in the energy industry, plunged in the first quarter, dropping to a -50.9 reading, down from -4.9 in the fourth quarter. More specific indices reveal similar numbers. For instance, the Dallas Fed’s index on capex fell off a cliff, declining from 9.1 in the fourth quarter to -49.0 in the first three months of the year, a reflection of the severe cuts to spending budgets.

In a rather revealing slide from the Dallas Fed survey, the average price that a driller needs to simply cover operating expenses (let alone earn a return) ranged from $23 in the Eagle Ford to $36 in “other” shale basins. In other words, with WTI currently trading below $25 per barrel, the “average” shale driller is not even covering the cost of keeping shale wells online.

Those are just the costs for operating. Breakevens to drill new wells are roughly double those levels, with average breakevens for Permian wells at $46. But even that figure only includes the cost of drilling a new well, and excludes other costs, such as debt servicing, overhead, and other corporate costs. “At $40 per barrel, you’re in the hole; at $30, it is hard to even keep producing existing wells. Nothing can be drilled at $30 per barrel,” one oil executive said in the Dallas Fed survey.

That does not mean that there will be an immediate wave of shut-ins. Companies keep operations going for a variety of reasons – there are costs to starting up and shutting down, the reservoir can be damaged in the process, and certain terms of land leases or debt obligations incentivize drilling even when it may not make sense.

But the figures do reveal that the industry is in a state of profound crisis and a lot of wells will shut down if current prices persist. 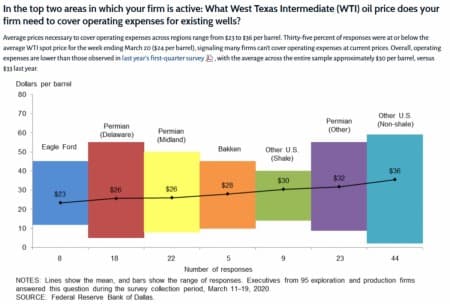 More than half of oil executives said that their headcount could drop this year, with nearly a quarter saying payrolls would “decrease significantly.”

Related: Oil Climbs As U.S. Pushes For An End To The Price War

When asked how long companies expected to remain solvent if WTI remained stuck below $40 per barrel, about 15 percent of respondents said they would be insolvent in less than 12 months, and another 25 percent said between one and two years.

In the special comment section, which allows oil executives to respond anonymously, the tone was dire. Here are a few select comments:

In fact, the topic of Russia and Saudi Arabia came up repeatedly as a source of trouble. Surprisingly, many executives downplayed the impact of the coronavirus, although perhaps that is because the survey was conducted before many of the more stringent stay-at-home orders went into effect.

There is a small strain of optimism from industry executives. Only about 15 percent of respondents see WTI staying below $35 per barrel by the end of 2020. Almost two-thirds of them see prices between $35 and $50. To be sure, even WTI in that range puts U.S. shale drillers in a financial bind, but the crisis would be not as severe as today.

By Nick Cunningham of Oilprice.com